What is basalt in geology ?

Basalt is a very common volcanic rock : basalts and andesites with pyroxene constitute 95% of continental and oceanic lavas. Basaltic magma results from the partial fusion of the peridotites of the Earth's mantle. After eruption and cooling, it gives a black rock with a microlitic texture, composed of plagioclases and clinopyroxenes (augite) with sometimes olivine, orthopyroxene, magnetite or ilmenite.
Basaltic lavas are very fluid and emitted in high temperature flows (1100°C to 1200°C). They solidify by giving prismatic, corded or chaotic flows, which can cover immense areas of several thousand square kilometers : the traps (India, Brazil, Siberia...). The underwater eruption of basalts gives rise to the formation of characteristic pillow structures with fixed borders (the pillow-lavas) resulting from thermal shock with water.
The classification and nomenclature of basalts are linked to their mineralogical and chemical compositions, which are a direct function of their genesis. Olivine plays a predominant role. They are divided into two main categories :
The tholeiitic basalts (or tholeiites) which are said to be saturated : Their mineralogy is labrador-bitownite, augite and hypersthene, very rare or absent olivine, exceptionally quartz or tridymite. These are the most siliceous basalts and the poorest in alumina, characteristic of oceanic areas. These saturated basalts constitute the main part of the ocean floor, a notable proportion of the island arches, the upper part of the ophiolitic complexes, vast continental effusions (the basalts of the plateau) and the dominant part of the basalts of the hot spots (Hawaii).
The alkaline basalts which are said to be undersaturated : They are composed of abandoning olivine, labrador, calcium and titaniferous augite with feldspathoids and frequently melilite. These basalts are mainly present in continental volcanoes, sometimes in island arcs and hot spots. Shoshonitic basalts (or shoshonites) constitute a major category of these olivine basalts, characterized by similar contents of Na2O and K2O.
The plutonic equivalent of basalt is the gabbro, a much less abundant rock on the surface of the Earth.
The solidification of basalts is frequently accompanied by the formation of cavities, corresponding to gas bubbles trapped during cooling. These cavities, sometimes several hundred cubic meters, kept open during cooling by the pressure of the gases, are partially filled by the last fluids circulating in the flow, allowing the genesis of sometimes exceptional mineralogical processions. The most famous are the amethyst geodes of the Rio Grande do Sul (Brazil and Uruguay) and the zeolites of Iceland, India or Puy-de-Dôme (France). 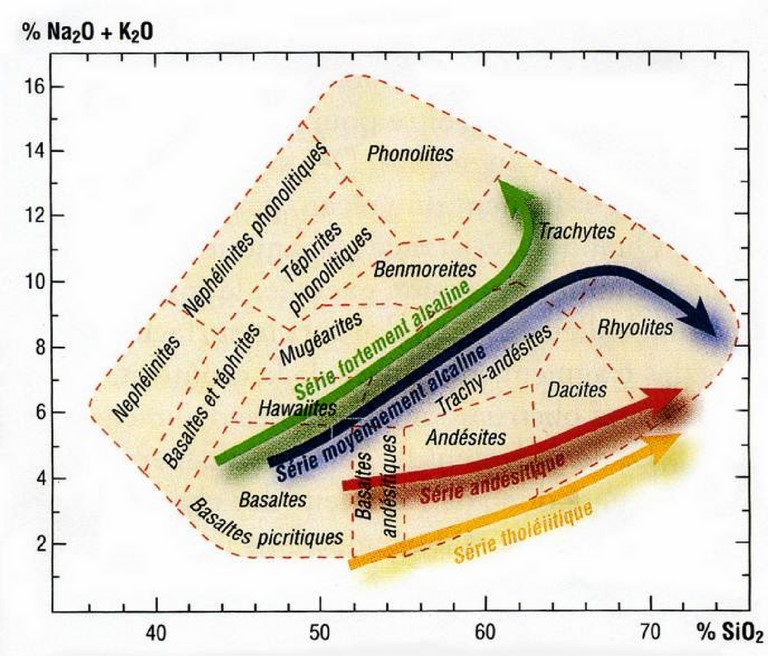 TAS (Total Alkali Silica) diagram showing four series. They are indicated by the four colored arrows. Note, for the two alkaline series, the reversals in opposite directions of the ends of the arrows, towards terms of the two very distinct series: rhyolites on the one hand and phonolites on the other.
Guide des volcans de France. Pascal Richet (2003). Ed. BRGM / Belin)
Please note : the percentages are by weight
Back to summary