Formerly confused with emerald because of its intense bluish green color, it has been defined and discovered by René Just Haüy. Dioptase comes from ancient Greek "dia" (through) and "optadzo" (vision) because its cleavages can be seen simply by transparency within crystals. It is a mineral species highly prized by collectors from around the World. It occurs in the oxidation zones of copper deposits under hot climates. Crystals are often elongated rhombohedrons vertically striated and more rarely scalenohedrons. Because of its low hardness and its easy cleavage, it is not very present in the jewelery sector, although faceted specimens were cut, they are often destined for collection.

Dioptase in the World 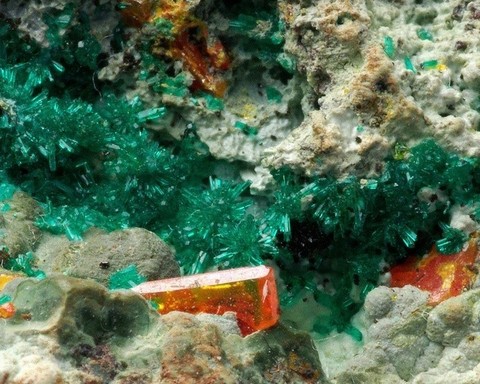 The best deposits are located in Central Africa, especially in Congo and in Democratic Republic of Congo where crystals up to 8 by 2 cm lining geodes in chrysocolla. Namibia also provides superb crystals up to 5 cm in Tsumeb Mine on white calcite, or quartz in Kaokoland. The largest known crystals exceed 15 cm and come from Angola, these are not a pleasing look. Beautiful crystals are also found in Kazakhstan and in several copper mines of Arizona as Mammoth-Saint Anthony Mine, where it can sometimes be associated with wulfenite (see picture in margin).

In France dioptase is anecdotal, it occurs in microcrystals in uraninite veins in red Permian clay schists, the deposit is located about 7 km south / southeast from Lodève in Hérault.

There is a twinning plane for dioptase, however the samples are extremely rare.

Among the scams listed for this mineral, there are some assemblages, see our article about this on the subject: "assemblages".