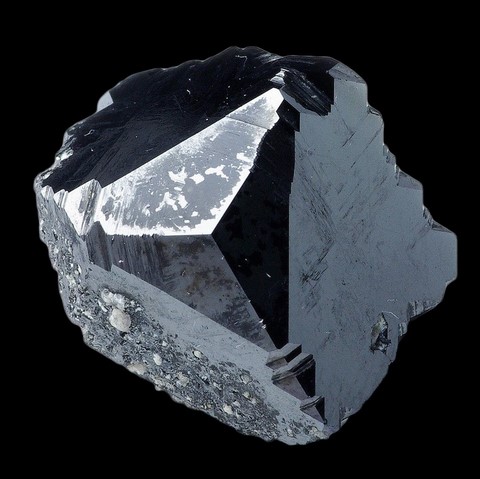 Bixbyite forms a solid solution with the term Mn2O3. It is a fairly rare mineral that is found in two types of environments : metamorphic manganese deposits, "gondites", and rhyolite lithophyses. It owes its name to the American mineralogist and mineral merchant Maynard Bixby. Bixbyite most commonly forms shiny black masses, as well as small cubic and cubo-octahedral crystals with shiny faces. Under the metallographic microscope, it is characterized by the constant presence of polysynthetic twins organized in square patterns. It is a mineral little known to collectors and which constitutes an accessory ore of manganese.

Bixbyite in the World

Bixbyite is common in manganese deposits in the districts of Postmasburg and Kuruman (South Africa) and Sitapar (India), as well as in Langban (Sweden), where it is mined along with other manganese minerals. It is generally massive there, sometimes in superb crystals measuring up to 10 mm (Lohatlha). But the most beautiful crystals of bixbyite are found in the lithophyses of hydrothermalized rhyolites. In the Thomas Range Mountains (Utah), bixbyite forms magnificent cubes exceeding 15 mm (main photo) sometimes deposited on crystals of honey yellow topaz. Similar associations are known in the neighboring locality of the Wah Wah Mountains as well as in Mexico (San Luis Potosi).

No scam known for this mineral.

TP : Opaque
RI : -
Birefringence : None
Optical character : None
Pleochroism : None
Fluorescence : None