Sulfur is present in nature under two forms : rosickyite, very rare, corresponding to monoclinic sulfur, and classical sulfur (orthorhombic), much more common. It is a mineral known since Antiquity and therefore owes its name to the Latin sulfur (sulfur). Sulfur occurs in two distinct geological environments. It is ubiquitous in volcanic contexts in degassing areas where it comes from the oxidation by air of H2S. It is also a common mineral in sedimentary formations : clays, evaporites and frequently at the top of salt domes, in oils, bitumens and coals. It results then from the reduction of the sulphates often due to the bacteriological activity. The native sulfur crystals are transparent to translucent and have a vitreous to resinous luster. Their color is usually bright yellow but can change to brownish or greenish when part of the sulfur is replaced by selenium or in the presence of bituminous inclusions. It burns at 270°C. Sulfur is a very important industrial mineral, it is the raw material for many compounds, including sulfuric acid used in the food industry (insecticide and fertilizer manufacturing), but also as an energy source (battery electrolyte), in the rubber industry, and for the manufacture of explosives. Sulfur compounds are used in the manufacture of soap, leather, paints, dyes, in petroleum refining, etc... At the historical level, the fumarolic deposits of the crater of Popocatépetl had an essential role in the conquest of Mexico by the Spanish. In 1520 Cortés had extracted to make the powder necessary for his firearms and guns. 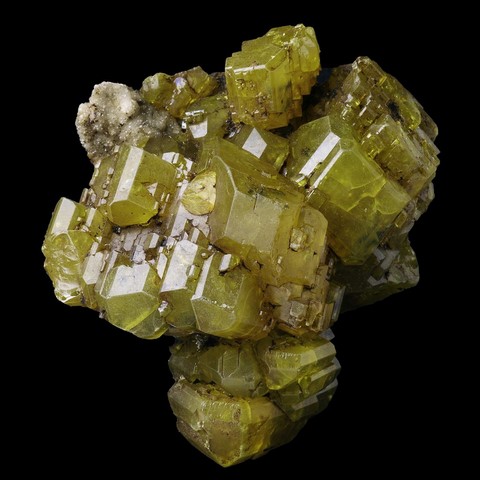 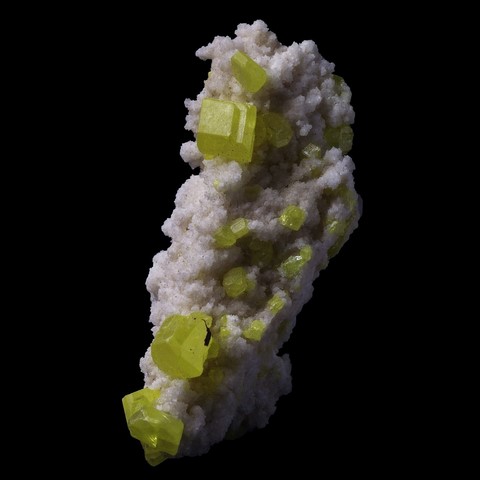 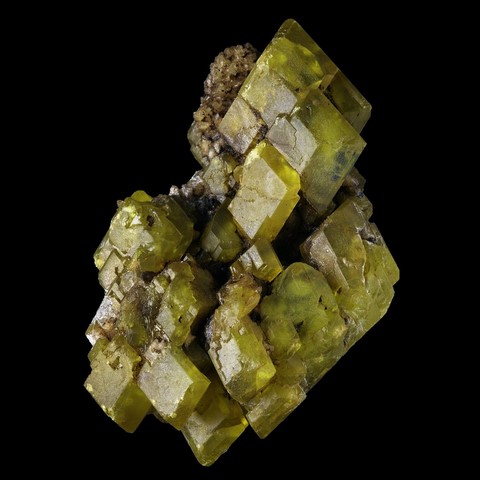 Sulfur in the World

The World's most beautiful specimens of native sulfur do not come from volcanic deposits but Miocene sediments from the Agrigento and Catania regions of Sicily (Italy), where some crystals can reach 30 cm ! They are frequently associated with aragonite and celestite. Also in Italy, good sulfur crystals are known in Perticara and Carrara. The crystals of Cadiz in Spain and Louisiana are also very famous.

In France, the deposit that produced the best specimens was Boes in the Pyrénées-Atlantiques, which supplied 2 cm crystals. Native sulfur is also found in micro-crystals on somes spots of the Mont-Dore volcanic massif in the Puy-de-Dôme (La Dore waterfall), but also in the burning coal deposit of the Ricamarie (Loire), Les Malines (Gard), in Cap Garonne (Var), etc...

On the volcanic deposits and especially at the fumaroles of the Solfatare (near Naples, Italy), when the samples of crystallized native sulfur are removed from the hot fumaroles (near 200°C in temperature), the passage of the sulfur monoclinic to orthorhombic is characterized by a rather singular audible crackling. 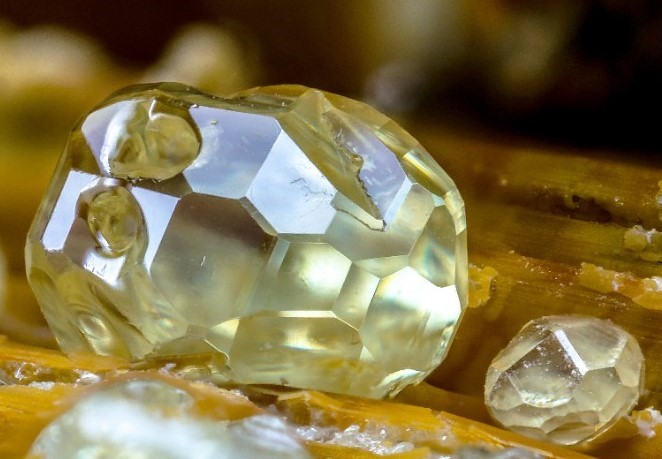 Some "commercial" sulfur samples are made by man, they consist of sulfur "melted" into a thin layer on a white matrix. The sulfur layer is very thin but covers the entire sample, the interior is white and shows no yellow trace of sulfur.